If you want to look for something good coming out of the closure of the Disneyland Resort, it will be hard to find. However, with the park closed and being unable to currently entertain guests, it gives the park plenty of time to work on outstanding projects. Here is a list from our friends over at The OC Register of projects that are currently being worked on at Disneyland and Disney’s California Adventure.

1) Mickey and Minnie’s Runaway Railway – Vertical construction started awhile back and they will continue to move forward with progress with the Mickey Mouse themed dark ride.

2) Haunted Mansion – The Mansion was already closed when the parks shut down for normal teardown and a scheduled refurbishing. The project will include fresh paint throughout the attraction. Also, there will be a few ride mechanics to be taken care of.

3) Snow White Scary Adventures – Snow White is in the process of becoming less scary. A fresh lighter paint scheme and removal of the somewhat frightening finale are what is waiting for guests upon return.

4) King Arthur Carrousel – The project will replace the steel canopy and also freshen up horses on the ride.

5) Indiana Jones Adventure – A permit has been issued to replace a plank bridge and also repair its steel structure.

9) Tomorrowland Entrance – The last remaining “French Fry Rocks ” have been removed according to numerous reports.

10) Frontierland Entrance – The entrance has been widened and the 15-foot gates have been replaced.

11) Parade Route – The brick apron between Sleeping Beauty Castle and The Matterhorn has been renovated.

12) Tom Sawyer’s Island – A permit has been issued for the reroofing of the Cider Mill and Blacksmith shop.

14) Main Street U.S.A. – Scaffolding has been removed from Emporium after it receives a fresh coat of paint.

17) Administration Building- A new backstage office is being built behind  Luigi’s Rollickin’ Roadsters.

19) Pixar Pal-A-Round – Many of the stationary gondolas have been removed for routine maintenance on the Pixar Pier Ferris Wheel.

20) Hyperion Theatre – Scaffolding has been removed for a newly refreshed cloudscape.

Disneyland is demonstrating that it is set to reopen with contemporary ideas, visuals, and experiences with a slew of refreshed projects.

When will the parks reopen? That’s a great question! Stick with us here at The DisInsider for all the news regarding the Disney Parks. 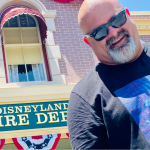 Shawn Williams is just a normal Dad and Papa who has a huge love of Disney and is so excited to share it with you all. He is also the creator and a co-host of Walt’s Apartment Podcast which is so proud and honored to be part of the Disinsider team.

Move Over Pooh and Peter Pan, Bambi is Getting The Horror Movie Treatment

Rumor of the Week: Lilo & Stitch