Marvel Entertainment announces their Rangel line-up for SDCC 2022. Take a look at what Comic Book News is coming our way!

San Diego Comic-Con is just around the corner. And now that Marvel has confirmed they will be there, we can expect to see some pretty exciting stuff! We have some ideas of what we might or might not see from Marvel Studios, and there’s a lot we’re hoping for!

Earlier this week, Marvel Entertainment announced its panel lineup for this year’s SDCC. Along with the ability to get some pretty cool merch, exclusive variant covers, and signatures from your favourite artists, here’s what Marvel Entertainment will be bringing to the event.

A special, live episode of ‘This Week In Marvel’ to celebrate the 60th anniversary of everyone’s friendly neighbourhood Spider-Man! Host Ryan Penagos is joined by Nick Lowe (VP & Executive Editor), writer Dan Slott, and several other surprise guests to celebrate this milestone for the web-slinging superhero.

Ever wanted to know what Wolverine’s favourite dessert is? How about whether the Illuminati take vacations together? Or maybe you have a burning need to know who would win a game of rock, paper, scissors between the Avengers. Well, look no further, as Editor-in-Chief C.B. Cebulski will be taking to the stage to answer any and all questions you may have about your favourite heroes. Keep an eye out for a secret, special guest along with an exciting giveaway.

Executive Editor Nick Lowe and Editor in Chief C.B. Cebulski are back to pass judgement! Joined by artist Adam Kubert, writer David Pepose and other guests to discuss the Eve of Judgement, and what’s in store for the future of the Marvel Universe.

Featuring a whole host of spectacular panellists, take a look at what’s coming in the Marvel Universe. See where the stories are heading for all of your favourite characters, big reeve ales for new events, and a unique giveaway. This panel will be hosted by C.B. Cebulski, Nick Lowe and editors Darren Shan and Lauren Bisom. They will be joined by a fantastic line-up, including writers Christopher Cantwell, Ram V., and Collin Kelly & Jackson Lanzing.

Marvel doesn’t just have some amazing women on the page, but also behind the stories. Join writer and host Angélique Roché as she speaks with some of the biggest women who work for Marvel, including editor Lauren Bisom and writer Nic Stone. Get to know what it’s like for women working in the comic book industry and what’s next for women-led titles from Marvel. Be sure to stick around for a special giveaway!

We’re pretty sure that there will be a lot of exciting announcements and reveals over the SDCC weekend. We already know a lot of what to expect from the weekend, but stick around to hear about merch, signings, and more events that will be taking place over the weekend.

Can’t make it to SDCC? Don’t worry, The DisInsider will be bringing you all of the news you need. You can also follow along live on official Marvel social media, as well as at Marvel.com. 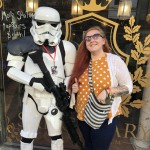 Taika Waititi Confirms Olympians Project In The Works At Marvel

The Acolyte: Made for Amandla

The Mandalorian Season 3 is “Off the Chain!”

‘Prey’ is The Number One Premiere on Hulu to Date