However an brand new rumour has emerged regarding the Han Solo film, however the rumour is instead about the Disney licensees who, according to StarWarsNewsNet, claims that these people were ‘very impressed’ by the sizzle reel of the film, and more specifically, being ‘especially impressed with Glover and Ehrenreich’, showing that production on the Han Solo film may be better than we previously thought. 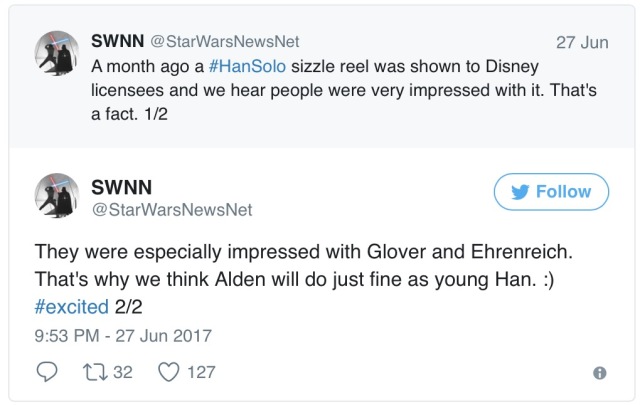 However, this likely directly disputes The Hollywood Reporter’s article where it mentioned how Lucasfilm was ‘not entirely satisfied with the performance that the directors were eliciting from Rules Don’t Apply star Alden Ehrenreich’ so much that apparently they ‘decided to bring in an acting coach’ suggesting that Disney and Lucasfilm were in fact not impressed with Alden Ehrenreich’s acting in the film.

The Han Solo Spinoff Film, currently, will release on the 25th May 2018 and will reportedly focus on the origin story about Han Solo and Chewbacca starring Alden Ehrenreich as the titular role, Joonas Suotamo as Chewbacca, Donald Glover as Lando Carlissian and Woody Harrelson as Han Solo’s mentor.