Snuggled between Space Mountain and the Tomorrowland Speedway, TRON Lightcycle / Run will undoubtedly be the most thrilling attraction at the Resort.

“The story of TRON Lightcycle / Run picks up after “TRON: Legacy” where Kevin’s son, Sam Flynn, has opened a second gateway into a digital realm called the Grid. The first of these portals he created is found at Shanghai Disneyland with the original TRON Lightcycle Power Run.“

Disney also confirms that Walt Disney World Cast Members will be the first to speed through the Grid alongside Kevin Flynn’s legacy, with Annual Passholders and Disney Vacation Club members getting a sneak peek before the attraction officially opens!

TRON Lightcycle / Run debuts to the public on April 4, 2023, while the Magic Kingdom’s Happily Ever After nighttime spectacular returns to the Walt Disney World Resort on April 3, 2023. 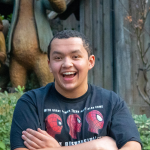